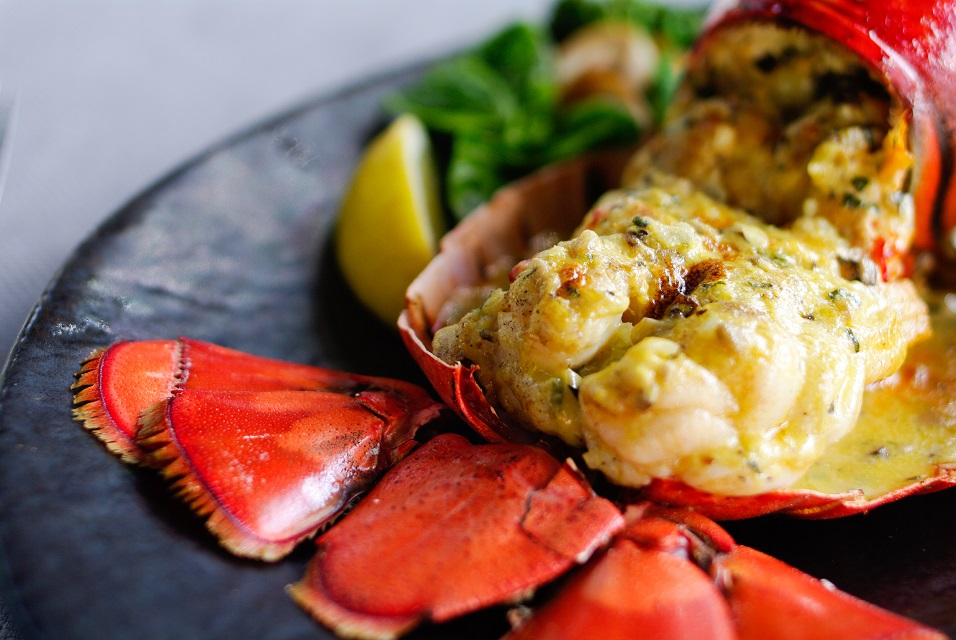 Food For Thought > Cheap To Chic: The Lobster Ascends

You wouldn’t suspect that a close relative of grasshoppers and tarantulas could be widely considered an elegant indulgence by gourmands all across the world, wouldn’t you?

And yet, every time a chef proudly presents a lobster-based creation as a signature dish, that’s exactly what happens. Prepared by broiling in butter or scampi, Newburg or in bisque, the lobster—a member of the invertebrate phylum, Arthropoda, just like insects and spiders, has held a place of honour at countless festive feasts and romantic repasts for well over a century.

Lobster’s appeal as a special delicacy wasn’t always so, not because diners were repulsed by the lobster’s less appetizing cousins, for back in the 17th century, the clawed crustacean was so abundant that it was hardly deemed exceptional.

A three-term governor of America’s Plymouth Colony who came over on the Mayflower, Edward Winslow, for instance, wrote to an English friend in 1621 saying, “Our Bay is full of lobsters all the summer”. At the end of that decade, Francis Higginson of Salem, Massachusetts, wrote in his book ‘New England’s Plantation or a short and true description of the Commodities of that Country’ that the “abundance of sea-fish is almost beyond believing… We have an abundance of lobsters, and the least boy in the Plantation may both catch and eat what he will of them. For my own part, I was soon cloyed with them, they were so great, and fat, and luscious”.

Travel ahead one century and several hundred miles northeast to Nova Scotia, and the situation was similar. In his 1876 book ‘The Emigrant and Sportsman in Canada: Some Experiences of An Old Country Settler’, essayist, John J. Rowan recounted that “on still summer nights, lobster spearing parties are the fashion among Halifax people… On one occasion, I saw several acres of potato ground manured with them… Lobster shells about a house are looked upon as signs of poverty and degradation”.

The Lobster gets Fancy

The secret ingredient to lobster becoming a luxury was coal. Not on a barbecue, but as the fuel that powered steam-engine locomotives, explained culinary historian and consultant Lou Greenstein of North Reading, Massachusetts. “As the Industrial Revolution got underway and railroads were built, the capacity existed for perishable foods like lobster to be packed in ice and transported from the point of origin to inland places like Chicago”, said Greenstein, author of ‘A la Carte: A Tour of Dining History’. The perceived romance of the travel story—not to mention the very real expense—added to the cachet of regionally ‘exotic’ foods.

The lobster kept gaining ground as the meat of choice on the menus of all gourmet restaurants of the world. This humble resident of Colonial Plantations has gone on to become as haute and chic as a supermodel walking the ramp during the Paris Fashion Week.

If the Puritans could see the esteem with which lobster is held today, they would without a doubt be shell-shocked. With melted butter easing its ascent this wonderful crustacean clawed its way to the top, and has made itself a comfortable spot ‘up there’.