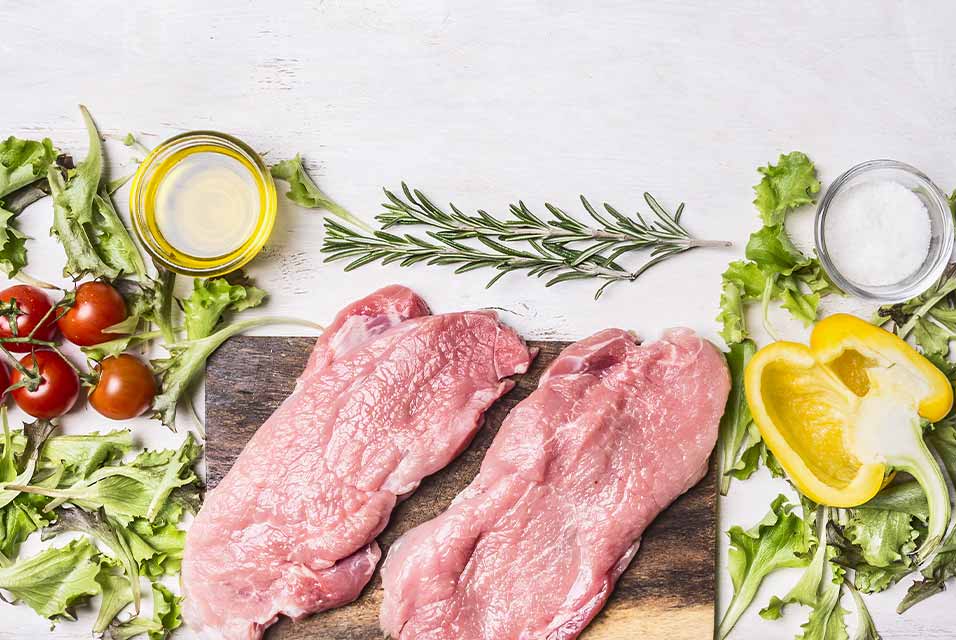 Meat is often considered unhealthy because it is high in saturated fat.

For this reason, meat (especially fatty meat) has been demonized. But new studies have shown that saturated fat is harmless…and meat has been making a comeback as a health food. In fact in 1961, Time Magazine blamed all heart disease and obesity on the FATS in meat. However in 2014, TIME Magazine published a trend of the decade which said that fats are actually healthy and it’s the SUGARS that are causing us harm. So if you are a meat eater, the next step to ask what the healthiest meat is. Lean meat is unanimously the answer. So, what is lean meat?

The most obvious difference between lean and fatty meats is the fat content…with fatty meats being much higher in total fat and lean meats with relatively lower fat content. Skinless chicken, turkey and red meat with the fat trimmed off are examples of lean meat.

Choosing lean is also appropriate for people who eat a high-carb diet, or need to increase protein intake while keeping calories low.

·  You get more proteins

Lean meats are rich sources of protein (the University of Michigan Health System says) that the body needs to build muscles, organs and bodily fluids.

·  You get healthier blood

Lean meat is a good source of iron and B-complex vitamins. Iron promotes production of healthy red blood and prevents anaemia especially among women during their pregnancy. For proper absorption of iron it’s always good to take required amount of vitamin C along with lean meat (Beulah Pretorius, 2016).

·  You get more energy

Iron is important in increasing energy in the body. Iron from animal meat is easily absorbed by the body compared to other food sources. People lacking in iron may experience fatigue, weakness, pallor and irritability. It is important that people have adequate amounts of iron to prevent the body from becoming weak.

·  You get low cholesterol

Contrary to popular belief, lean meat does not significantly contribute as a risk factor for cardiovascular diseases. A study conducted by RMIT University in Australia proved that eating LEAN MEAT can actually lower plasma cholesterol and contribute to an increase in Omega 3 levels in tissues. In fact, before discovering agriculture our ancestors were eating a diet which was high in meat content. Lean meat, according to study is healthy and beneficial to the body as long as it is part of a balanced diet and the visible fat is trimmed prior to cooking.

The general health message to the public about meat consumption is both confusing and misleading. It is stated that meat is not good for health because meat is rich in fat and cholesterol and high intakes are associated with increased blood cholesterol levels and coronary heart disease (CHD). Research was carried out with 54 studies from the literature in relation to red meat consumption and CHD risk factors. Substantial evidence from recent studies shows that LEAN RED MEAT trimmed of visible fat does not raise total blood cholesterol and LDL-cholesterol1 levels.

Dietary intake of total and saturated fat mainly comes from fast foods, snack foods, oils, spreads, other processed foods and the visible fat of meat, rather than lean meat. In fact, lean red meat is low in saturated fat, and if consumed in a diet low in Saturated Fatty Acids (SFA) is associated with reductions in LDL-cholesterol in both healthy and hypercholesterolemia subjects. Lean red meat consumption has no effect on in vivo and ex vivo production of thromboxane and prostacyclin or the activity of haemostatic factors. Lean red meat is also a good source of protein, omega-3 fatty acids, vitamin B12, niacin, zinc and iron.

Expect lean meat to be more expensive than other meats in the market. Lean meat contains only 10 percent fat which is due to the fact that it is less likely to increase bad cholesterol levels in the body. When cooking lean meat, try to cut the visible fat and keep your portions in check. The key is to have your meat in healthy levels together with your fruits, vegetables and whole grains to complete a healthy diet that can make you live consciously.

Ryan Fernando the Award winning Celebrity Nutritionist says “I ask my clients to choose lean cuts, limit their Red lean meat intakes to one meal a day, be generous with white meats and add a whole lot of vegetables as their carbs source when eating meats. If there are no lipid or diabetic issues I ask my clients to eat to their heart’s content”.