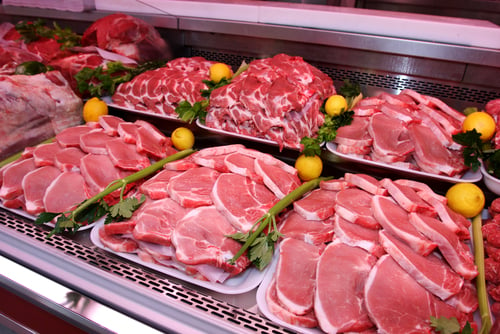 The past few days have been quite worrisome for meat-eaters in India with the advent of the banning of Illegal slaughterhouses in North India. The intention behind this ban is up for contention but we cannot deny that this would bring about order to the current unorganised sector that is the meat industry.

Legally speaking, all slaughter is to be done at abattoirs established by the government. Animals from independent farmers as well as commercial farmers gather at shanties where one can pick and choose the animals desired and have it slaughtered. Illegality creeps in in this entire process in order to avoid the per-animal fee for slaughtering.

The so-called ‘wet’ markets thrive on the lack of knowledge about meat and its production by its buyers. Most of the population would rather not want to remind themselves that the meat they eat was at one point in time alive and kicking. As crass a supposition one might think that may be, it is one of the major pillars upon which the meat industry has been built on. We rarely dwell on the process of how the meat that we eat got to our plates. Not to invalidate every meat seller, but it would help greatly when meat buyers dig a bit deeper and get informed about the where the meat is from and how it was processed aka slaughtered.

Now coming to the other aspect of the meat procurement process, it doesn’t end with having meat legally slaughtered at the abattoirs with reference to the health of the meat. Meat is a tricky product to deal with. It is deliciousness but if not handled correctly could turn out to be poisonous. Health and safety of the meat buyer depends directly on the health of the animals ergo the meat. The emphasis cannot be enough upon this subject because there exist underground practices of bringing to slaughter animals that are sick in order to make a buck off their meat lest they die in vain.

To overcome this, one must go further than the abattoirs to the farmers who raise the animals. The raising of animals and not manufacturing of them is key to the health of the meat. Beginning with a relationship with the farmers to ensure that, together, the animals are treated right for stress has and adverse effect on the quality of meat; a biochemist to ensure the chemical components in the blood stream of the animals—antibiotic residue and growth promoter prevention; a quality analyst to identify the ideal weight, quality and characteristics of the animals and ensure the meat procured qualifies in these aspects; legal slaughtering of the animals at abattoirs in the presence of a veterinarian who checks the animal’s health prior to being slaughtered generating physical fitness and post-mortem reports to document its clean health; transporting the flesh to an enclosed, temperature-controlled hygienic facility properly segregated so that different types do not come in contact with each other while ensuring little exposure to the environment lest oxidation occurs; and finally hanging the meat for at least 20 hours depending on its size to facilitate rigor mortis (so that the muscles get rested and tender) and enable the conversion of the inedible flesh to edible meat.

Understanding the science behind procuring meat would benefit the average meat eater greatly. Being informed is a step towards progress and complete transparency is the leap towards health. Remember, meat is only as good as where one gets it from, so if unsure, best to look elsewhere.