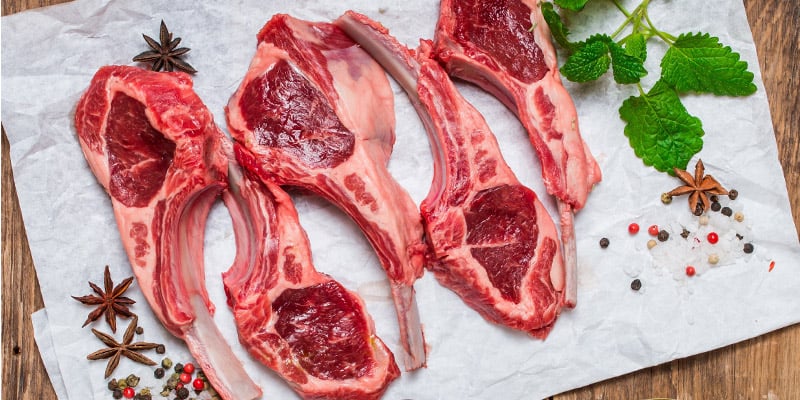 Meaty Hacks > CHOP TILL YOU DROP!

Aaaah…lamb. Such a delectable taste for so humble a creature. Lamb is a very versatile meat and it’s succulent excellence can be indulged in a variety of different ways. In the 17th Century,  Steakhouses in London started cooking different sections of meat and the incredible idea of cooking different cuts of the same animal in a different way was born. One of the most famous and universally loved cuts of lamb, is the Chop, and today, we will ‘chop’ all your doubts away regarding it. A meat chop is a cut of meat, cut perpendicularly to the spine, and usually containing a rib or riblet part of a vertebra and served as an individual portion. The most common kinds of meat chops are pork and lamb. A thin boneless chop, or one with only the rib bone, may be called a cutlet, though the difference is not always clear. The popular Indian dish, the Chaap, is usually made with Lamb and Mutton ribs.

Chops are generally cut from pork, lamb, veal, or mutton, but also from game such as venison. They are cut perpendicular to the spine, and usually include a rib and a section of spine. They are typically cut from 10–50 mm thick.

Chops may either be cut by separating the ribs using a knife and then cutting the spine with a hacksaw or cleaver; or by sawing perpendicularly to the spine using a band saw, which cuts across some ribs diagonally. Chops are sometimes beaten with the side of a cleaver or with a meat mallet to make them thinner and more tender.

Chops may be cooked in various ways, including grilling, pan-broiling, sautéing, braising, breading and frying, and baking. Lamb chops are often cooked with dry heat, grilled or pan-broiled.  In South America and Namibia the traditional way of cooking chops is to grill them outdoor over open fire coals, called braaiing.

Interestingly enough, the lamb chop is not just a dish which has been savoured by foodies across the globe for many years, this amazing dish transcended onto the TV Screen as the protagonist for an American Pre School TV Series called Lamb Chop’s Play Along. Choppin’ hungry now? Don’t fret, just chop away at your keyboard as you type Licious.in for the best Lamb Chops in town.