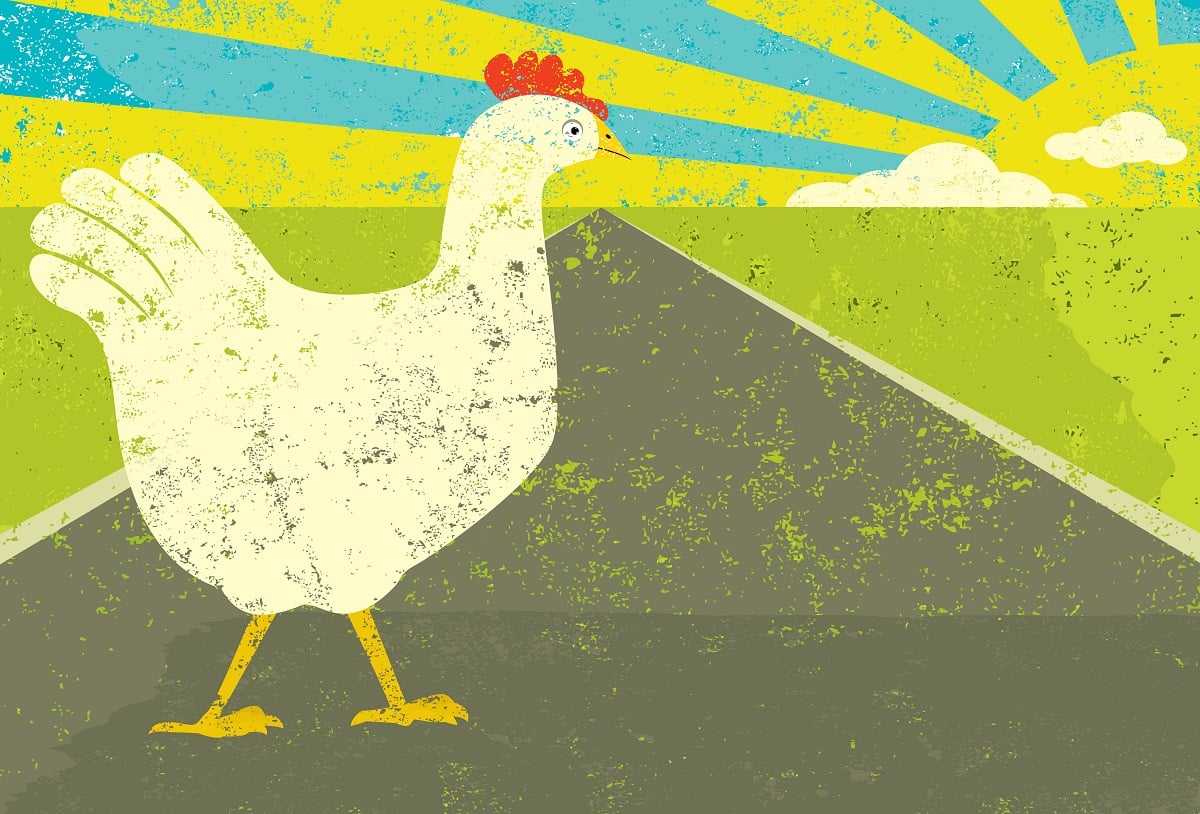 Meaty Hacks > Why Did The Chicken Cross The Road?

It is one of the most ubiquitous and beloved riddle-jokes of the world. The most common answer, or more importantly, the punchline is: “To get to the other side.”

It is a great example of anti-humour, in that the curious setup of the joke leads the listener to expect a traditional punchline, but they are instead given a simple statement of fact.

The riddle appeared for the first time in an 1847 edition of The Knickerbocker, a New York City monthly magazine:

There are ‘quips and quillets’ which seem actual conundrums, but yet are none. Of such is this: ‘Why does a chicken cross the street? Are you ‘out of town?’ Do you ‘give it up?’ Well, then: ‘Because it wants to get on the other side!’

“Why did the chicken cross the road?” has become largely iconic as an exemplary generic joke to which most people know the answer today, but how would icons from the pages of history, answer it?

Aristotle : To actualize its potential.

B.F. Skinner : Because the external influences which had pervaded its sensorium from birth had caused it to develop in such a fashion that it would tend to cross roads, even while believing these actions to be of its own free will.

Carl Jung : The confluence of events in the cultural gestalt necessitated that individual chickens cross roads at this historical juncture, and therefore synchronicitously brought such occurrences into being.

David Hume : Out of custom and habit.

George Washington : Actually it crossed the Delaware with me back in 1776. But most history books don’t reveal that I bunked with a birdie during the duration.

Hamlet : Because ’tis better to suffer in the mind the slings and arrows of outrageous road maintenance than to take arms against a sea of on coming vehicles…

Johann Friedrich von Goethe : The eternal hen-principle made it do it.

John Constantine : Because it’d made a bollocks of things over on this side of the road and figured it’d better get out right quick.

Julius Caesar : To come, to see, to conquer.

Ludwig Wittgenstein : The possibility of “crossing” was encoded into the objects “chicken” and “road”, and circumstances came into being which caused the actualization of this potential occurrence.

Machiavelli : So that its subjects will view it with admiration, as a chicken which has the daring and courage to boldly cross the road, but also with fear, for whom among them has the strength to contend with such a paragon of avian virtue? In such a manner is the princely chicken’s dominion maintained.

Malcolm X : Because it would get across that road by any means necessary.

Martin Luther King, Jr. : I envision a world where all chickens will be free to cross roads without having their motives called into question.

Martin Luther King : It had a dream.

Plato : For the greater good.

Sigmund Freud : The chicken obviously was female and obviously interpreted the pole on which the crosswalk sign was mounted as a phallic symbol of which she was envious, selbstverstaendlich!

Hippocrates : Because of an excess of light pink gooey stuff in its pancreas.

Licious: To buy chicken. But you don’t have to, because we’ll deliver it to your doorstep right away.

So, what’s your punchline?