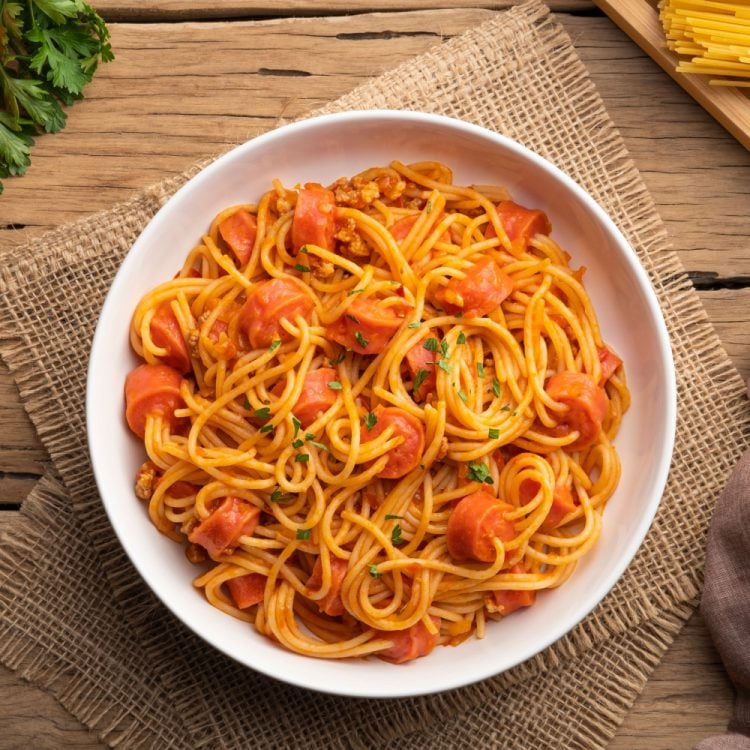 Smothered in cheese, slathered in ketchup, or heaped high with chilli, the hot dog is one of our all-time faves. We all know the chicken sausage used to make the Hot Dog is known as Frankfurter. But do you know that the term “frankfurter” derives from the fact that a famous hot dog-like sausage was invented in Frankfurt, Germany? After this, it gradually became so popular in America that it is now the most sought-after food there. Not only abroad but the hot dog is equally popular in India as well. So, today, we have a delicious Hot dog Spaghetti Recipe for you.

Tad Dorgon, a sports cartoonist for the New York Times, is credited for naming hot dogs. Before its present enigmatic moniker, hot dogs were known as red hots’ or ‘dachshund sausages.’ When merchants at the New York Polo Grounds yelled, “They’re red hot! Get your dachshund sausages while they’re still piping hot!”, noted the artist, who sketched barking dachshund sausages in a warm roll. He couldn’t spell “dachshund,” so he just typed “hot dog!”. This cartoon became a viral phenomenon, and the phrase “hot dog” was invented. Even though historians have been unable to locate a copy of the cartoon, the phrase was already in use in the twentieth century.

Ensure you have the best quality spaghetti that goes well with the chicken sausages for making hot dog spaghetti. Another point to get the flavours out of the spaghetti is by preparing the sauce at home. You can easily prepare the spaghetti sauce with crushed tomatoes simmered with onion, and garlic over a saucepan in extra virgin olive oil. You may season it with black pepper and salt and add herbs like paprika, oregano, parsley, or basil. Simmer for 15-20 minutes until you get the desired thickness and there you get your homemade spaghetti sauce.

However, the most essential element in this recipe would be the frankfurters. You can add any sauce of your choice but just any frankfurter will not work for the dish. So, how to obtain the perfect frankfurter? Read the next section to find your solution.

Hotdogs: How do I cook a frankfurter?

What forms the base of a crunchy, delectable hot dog spaghetti? The quality of the meat right? The perfectly spiced sausages elevate the taste of the food. It is therefore essential to cook a frankfurter in the right way. Seems tricky? Well, we have made the task easier for you without any compromise with the flavour and texture of it.

We at Licious, have brought to you professionally crafted Chicken Frankfurters With Paprika & Cheese which cook within minutes. Tender chicken mince has been ground finely together and artisanally crafted into frankfurters.

Juicy and firm, they’re smoked to perfection over fine oak wood and seasoned with paprika and cheese. When you break these firm sausages, you’ll see the meat, cheese and paprika specs. Bite in and you’ll enjoy a juicy, smokey and cheesy flavour with a mild hot taste.

How is the meat so juicy and flavourful? Well, it all starts with procuring the chicken from government-approved bio-secure farms and selecting them at the right size and weight. The chickens go through 150+ quality checks and the selected ones are cleaned, cut, and used to make our frankfurters. In addition to this, we use only fresh herbs & spices and chef-crafted gourmet recipes. All our frankfurters are constantly stored at a temperature of 0-4°C to retain their freshness.

So, get ready for this exquisite treat by following the spaghetti and hot dog recipe below. Explore assorted cold cuts at Licious to make mouth-watering recipes. Order fresh, juicy and perfectly seasoned frankfurters from Licious and make hot dog spaghetti at home. Remember to click a few pics for Instagram and tag us using #MadeWithLicious we'd love to see your finished dish.