Every year on the 23rd of January, pie eaters from across the world rejoice and celebrate by feasting upon a classic, delicious pie. Yes, that’s right! Pie Day is celebrated every year and pie lovers indulge themselves in a day of eating their favourite delicacy.

Did you know that  Pie Day is officially celebrated and sponsored by the American Pie Council and it is treated in the same likeness as a  holiday! The United States especially has a deep found love and devotion towards this baked, flaky dessert. There are numerous references to this cultural celebration from Don McLean’s cult-classic “American Pie” to expressions like “as American as apple pie”.

We know your mouth has already started watering thinking about delicious pies! To celebrate this incredible day of stuffed goodness and with the occasion of  Pie Day, one of our chefs has crafted a savory and delicious recipe called the Chicken Frankfurter & Mushroom Pie!

Before you get started with preheating your oven and creating your very own pie, let’s take a trip down memory lane and learn more about the history of Pie Day.

The History of  Pie Day

Pie has had a very rich history over the last few centuries, as it is one of the oldest prepared foods which dates as far back as to the ancient Romans. The first-ever known recipe for pies that was created was the rye-crusted, honey, and goat cheese pie!

The Romans were true artisans in the way that they went about creating various types of pies that would suit the palettes of the general population. They created pies that were filled with a vast variety of different meats, seafood, and fruits! In a recent discovery, it was also found that a dense pie called placenta which is similar to a cheesecake was also made frequently.

Pies played a great role in Roman feasts, and the crust was mainly for filling and unlike today’s pies which have a rich, luscious, buttery crust, it wasn’t eaten at all. The crust was a container to keep the meat moist and prevent it from burning, acting as a protective shell!

In the 12th century, pies originally appeared in England and were filled with delicious meat! The infamous movie “Sweeney Todd” was created based on the stories and jokes that came out of this era. When the Puritans and English settlers fled for the new world, they made sure to take the secret recipe of the pie with them. This is mainly why an American Thanksgiving table is incomplete without the presence of sweet pumpkin and pecan pies.

Ultimately, we owe this day to Mr. Charlie Papazian who conveniently created  Pie Day in the 1970s on his birthday!

For this recipe, we have used our Smoked Chicken Frankfurters, as they will add a subtle yet deliciously smoky flavor to your pies. Forget about prep time, as the chicken frankfurters are ready to cook which means that you just need to fry them up and you are good to go!

Also just so you know, all Licious chicken is sourced from government-approved partners and biosecure farms. The chickens all are given 100% vegetarian feed, and only the chickens that meet the right weight of 1.5-1.6kgs are chosen from the lot.

All of our meat and seafood undergoes 150+ safety and quality checks before they are approved for sale. The meat is always cut, cleaned then washed in RO purified water by expert meat technicians, and sealed with vacuum-pack technology. Our delivery heroes then deliver your orders directly to your doorstep for the utmost convenience.

Order Smoked Chicken Frankfurters
Print Recipe
Chicken Frankfurters & Mushroom Tart Recipe
The recipe consists of two parts, which include - making the tarts, cooking up the delicious chicken frankfurters, and adding in the mushrooms. All of the ingredients are staple pantry items so that you can whip up the tarts in no time this Pie Day! 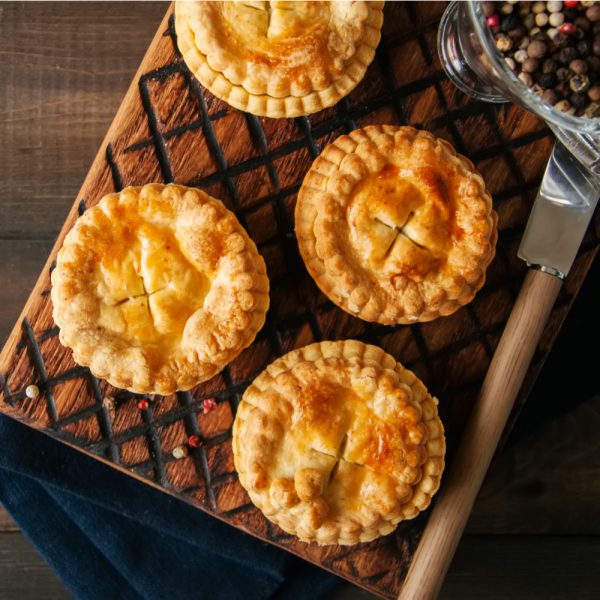 So, pie lovers! We hope you truly enjoy making these wonderful tarts and have a great time eating them with your friends and family. We would be incredibly happy if they become your favorite snack. Let us know in the comments how you liked the dish. If you’ve given this recipe a shot, share pics on Instagram and tag us with #MadeWithLicious, we would love to see your creation. Happy Pie Day!