Biryani has been the mascot of Indian cuisine for centuries. If you were to ask any non-Indian about a famous Indian dish, they would include biryani in their list. But do you know that the dish originated from Persia?

It took a long journey from Persia to your plate in India. There are many types of biryani that you can find in the country ranging from Mughlai Biryani, Kolkata Biryani, Awadhi Biryani, Hyderabadi Biryani and even Bombay Biryani.

It is believed that the origin of biryani dates back to Persia, where it was very famous. When the Mughals came to India, they started cooking the same in their royal kitchens and for their guards. That’s how this specific dish gained accolades all over India.

Making Hyderabadi spicy chicken biryani at home can be very tedious. To save you time, We at Licious, have come up with a ready-to-cook biryani mix that can be ready in 3 simple steps. So, the method that usually takes hours can now be done in minutes.

We do not compromise on the flavours of the Hyderabadi chicken biryani – because that’s what defines it!

What is Hyderabadi Chicken Biryani?

The Hyderabadi chicken dum biryani recipe uses fresh spices, flavourful herbs, and other ingredients, which add a royal touch to the dish. There is also the use of the best variety of rice for the dish.

The history of the Hyderabadi chicken biryani recipe dates back a few centuries. It was after the appointment of Nizam-Ul-Malik as the new emperor of Hyderabad by Aurangzeb.

He asked his royal chefs to create an authentic Hyderabadi recipe to please Aurangzeb. As a result, his chefs created more than 50 different versions of the biryani that consisted of hare, fish, shrimp, quail, and even deer. The biryani with goat and chicken meat pieces was liked most by the Emperor. Thus, the Hyderabadi chicken biryani was discovered.

Today, the Hyderabadi dum biryani is only made with chicken or meat pieces. They are thoroughly marinated and then cooked along with the rice. Saffron is the main ingredient of the dish.

At Licious, our chefs have curated a time-saving, authentic solution that will save hours of toiling in the kitchen for a delicious plate of Hyderabadi Biryani.

All you need to do is order our ready-to-cook biryani mix from our website. It has no added preservatives or chemicals.

The meat is fresh and of premium quality. Each pack contains everyone’s favourite pieces so you don’t have to worry. We’ve included enough meat for two people.

If you want to know how to make Hyderabadi chicken biryani at home, order our ready-to-cook biryani range from our website and follow the simple steps below.

Order Licious – Chicken
Print Recipe
Hyderabadi Chicken Biryani Recipe with Licious
The Hyderabadi chicken biryani can be made easily at home without any hassles. Our ready-to-cook range of biryani helps you make the most delicious biryani in 3 simple steps. Preparation: Rinse and soak 2 cups of rice which equals 250 gms. Soak the rice in water for 20 minutes. Drain the water after 20 minutes and set it aside. 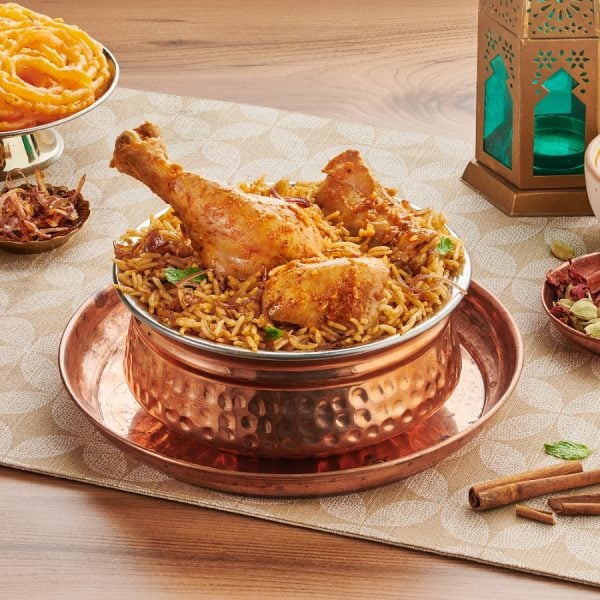 Make sure all the contents of the Licious packet are used in the recipe. Combine the rice and meat well. Serving Suggestions Serve with raita on the side. You can garnish with chopped onions or coriander leaves.

If this recipe got you craving biryani, what are you waiting for? Try this at home today and bring the taste of Hyderabad home. Make sure to use #MadeWithLicious when you share photos on Instagram!