It’s hard to imagine life without Pizza, as it is a dish filled with delicious, cheesy goodness! Every single year on the 9th of February the entire world celebrates the joy of eating pizza. Pizza day is celebrated across the globe where various pizza lovers get together to enjoy their favourite delicacy!

Did you know that before World War II, pizza was not that well known outside of Italy or in Italian immigrant communities? The cheesy disc went from a niche cultural meal to being the star of the show wherever it turned up.

What is the History of Pizza Day?

Even though flatbreads with toppings were consumed by ancient Egyptians, Romans and Greeks – the modern birthplace of pizza was southwestern Italy’s Campania region which was home to Naples. Originally founded in 600BC as a Greek settlement, Naples in the 1700s and early 1800s was a great city, that was thriving on the waterfront.

Neapolitans were in the need of inexpensive food that could be consumed really quickly and Pizza with its flatbreads and toppings could be eaten for every single meal, which helped fulfil this need. Early pizzas also had a variety of tasty toppings such as garlic, anchovies, oil, cheese, and tomatoes.

When Italy was finally unified in the year 1861, Queen Margherita and King Umberto who were bored of their French cuisine had a real hankering for an assortment of pizzas from the city’s Pizzeria Brandi. The queen enjoyed a dish called the pizza mozzarella which was a pie topped with soft white cheese, green basil, and red tomatoes, and which was later called the Margherita pizza.

However, this delicious pie could no longer be kept a secret as news about the pizza travelled across the sea to the United States. Italian immigrants were replicating flatbreads in New York and other American cities and accidentally ended up creating a culinary statement. The flavours and aromas of pizza began to intrigue both non-Italians and non-Neapolitans alike!

A few years later down the line, the Deep Dish pizza came upon the scene with the Pizzeria Uno in Chicago inventing it! It helped to spark the debate of whether a casserole could actually even be a pizza! Next, came the commercialization of pizza and as you know it commercial pizza chains opened up their franchises all around the world.

For this recipe, we have used our Smoked Chicken Frankfurters, as they will add a subtle yet deliciously smoky flavour to your pizza pies. Forget about prep time, as the chicken frankfurters are ready to cook which means that you just need to fry them up and you are good to go!

Also just so you know, all Licious chicken is sourced from government-approved partners and biosecure farms. The chickens all are given 100% vegetarian feed, and only the chickens that meet the right weight of 1.5-1.6kgs are chosen from the lot.

All of our meat and seafood undergoes 150+ safety and quality checks before they are approved for sale. The meat is always cut, cleaned then washed in RO purified water by expert meat technicians, and sealed with vacuum-pack technology. Our delivery heroes then deliver your orders directly to your doorstep for the utmost convenience.

The recipe consists of two parts which include making the pizza sauce and finally the base of the pizza pie which is topped with fresh ingredients. All of the ingredients are staple pantry items so that you can whip up your pizza in no time this Pizza Day! 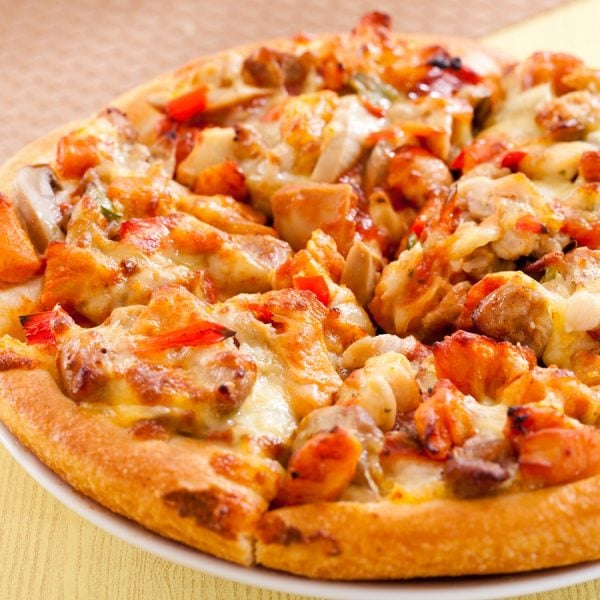 So, pizza lovers, we hope you truly enjoy making this wonderful pizza and have a great time eating it with your friends and family. We would be incredibly happy if it becomes your favourite snack, and you can let us know in the comments whether you liked the dish. When you have tried out this recipe, share pics on Instagram and tag us with #MadeWithLicious, we would love to see your creation. Happy Pizza Day!