Chicken Biryani, a world-famous Indian delicacy, requires time and experience to prepare but is well worth the effort. Long-grained rice seasoned with aromatic spices like saffron and stacked with tender and juicy chicken in a rich sauce. The dish is then covered, and the lid is fastened with dough before the biryani is cooked over low heat. This is unquestionably a special occasion meal.

There is some disagreement over how this cuisine originated, but most believe that it originated in Persia as a simple rice-and-meat dish and subsequently spread to India. The numerous biryani recipes were later developed, mostly in areas where there was the gourmet impact from Muslim dishes, notably in the city of Hyderabad in South India, but also throughout the southern coast. Biryani’s numerous varieties are determined by where the dish is prepared. Some distinctions are minor, while others are characterized by the addition or substitution of components.

What are the best dishes to serve with biryani?

Different foods compliment each of the recipes in the various varieties of biryani. However, one side dish that works well with all types of biryani is “Raita.” Raita is a spiced curd that includes freshly sliced onion, cucumber, green chillies, and pomegranate. This mixture is then seasoned with salt, pepper, sugar, and roasted cumin powder. Along with biryani, many people like a chicken dish. A moderately spiced, soft and juicy chicken dish can go well with your tantalising Chicken Biryani. Salan, pickled onion, buttermilk, and sweet lime juice are also served with Biryani.

The best chicken biryani needs fresh and tender chicken pieces to taste authentic. On Licious, we offer a variety of fresh chicken cuts to meet all your biryani needs! Our chicken is sourced from biosecure farms and picked at the right weight and size for tender pieces. Additionally, all our chicken cuts undergo 150+ safety & quality checks before being approved. Our expert meat technicians cut, clean and vacuum pack the meat for maximum freshness before it is home-delivered to your doorstep. 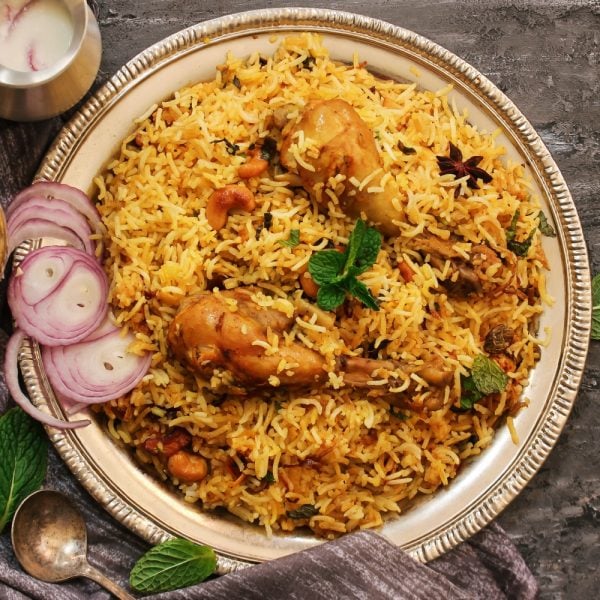 If you don’t prefer using ghee, you can substitute it with oil. Drizzle ¼ tsp oil on the boiled rice after draining it to avoid it from turning mushy.

What’s your version of Hyderabadi Chicken Biryani? We would like to try yours, so don’t forget to share your recipe version with us!

Frequently Asked Questions How can I make the biryani moist?

You can cook rice and chicken separately and then combine everything or set the layers.

How do I prevent my biryani from turning mushy?

Avoid overcooking the rice as it can ruin the biryani. Always slow-cook the biryani so that all flavors are combined well, and the biryani turns out to be perfect.

What can I use as a substitute for saffron milk?

Saffron step is entirely optional. However, this adds a pop of colour to your biryani. You can also add food colour instead of it.

Try out this recipe and share it on Instagram with #MadeWithLicious and get a chance to win Licious cash.