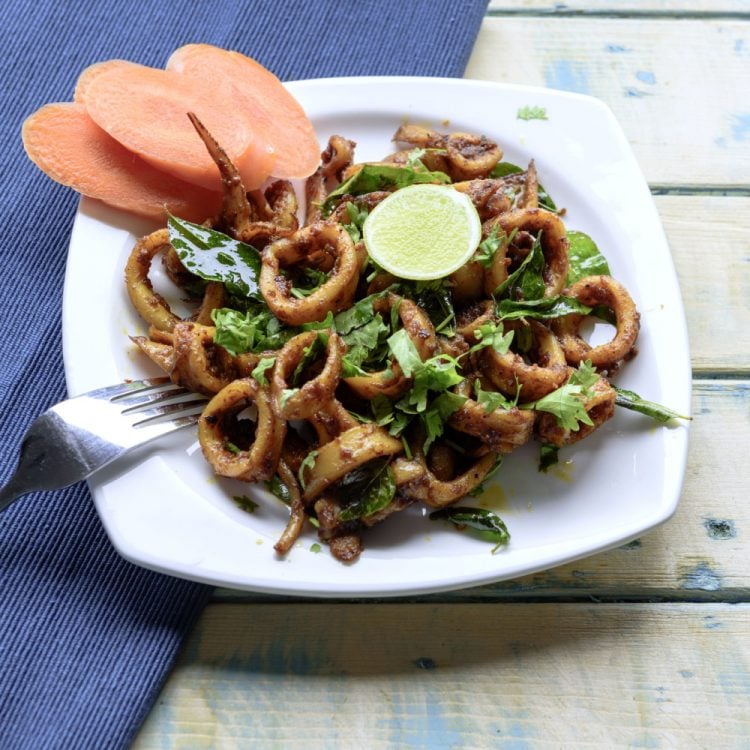 A sought-after seafood variety in Southern India, Kanava fish is a kind of succulent squid with a slightly sweet taste.  Especially in the coastal regions of South India, squid is prepared in multiple ways, for eg: Squid Fry Recipe. Squids are even used for sashimi, tempura, and sushi recipes. They can also be consumed in the form of gravy. A few popular squid recipes include Salt and Pepper Squid, Spanish Rice-Stuffed Squid Risotto, and more. Today, we have have for you an authentic Squid Fry Recipe.

Where is squid found and consumed?

Squid is consumed in many English cuisines as well. It is sold in the United States, Australia, New Zealand, South Africa, and Canada. In the UK, it is served as a starter, street food, and bar snack. In Syria and Lebanon, it is served with tartar sauce. Squid is widely consumed in coastal areas of many Asian countries like India, Sri Lanka, China, Japan, and more. In India, it is quite popular in a few southern states like Tamil Nadu and Kerala. It is also known as Calamari.

Scrumptious fish Kanava and its taste

A squid is a sea creature with white and pale colour. However, it can change its body colour to pink, red, rust brown, or even bright metallic rainbows. Many people think of squid as fish due to its aquatic habitat. However, it is not a fish. The reason is that fish feature spinal cords but not squids. Squid meat is white and firm. It has a sweet, nutty, and mild flavour.

Kanava fish is enriched with proteins, omega-3 fatty acids, minerals, and vitamins. Kanva is also high in selenium, copper, and zinc, which help boost the immune system besides strengthening the health of bones and blood cells. Vitamin B12, present in Kanava, helps protect the heart from strokes.

Order Licious – Squid Rings
Print Recipe
Kanava Fish Recipe
Squid fry is one of the popular Kanava fish recipes prepared using squid rings and is generally preferred by seafood lovers. By slicing the squids crosswise, we obtain the squid rings. But if you are wondering how to prepare a scrumptious Squid fry recipe, then follow this step-by-step procedure:- So, go ahead, try this recipe and let us know in the comments how you liked it.